8:48 Minute Celestial Communication, to the Theme of “Inner Knower”

We start to practice together on 22nd September

We Invite You to Join Us!

Merge with your Inner Knower

With this practice you can:
GIVE yourself time for care and…
ATTUNE your inner pulse with Nature’s cycles to flow in harmony:

Co-existing within each of us is the creativity and wisdom of all seasons. As we move through life, we focus on and develop different stages of the cycle. Each stage unfolds with its own sacred potential and dimension – all continuously dialoguing with each other.

Attuning our inner nature with Nature’s outer phases, our innate path reveals itself, guiding us to our ever unfolding fulfilment of purpose.

~ MOVEMENT MEDITATION ~
Based on 2nd Pauri of Nanak’s JapJi

choreographed by Sara Avtar to embody this theme

including Six Once Weekly Guidance Videos.

22nd SEPTEMBER 2022!!
Practicing together online as a group, supporting and
“holding each other…
because we know we care…
imprinting our love onto a lattice in the air….”

This deeply mystical and meditative music helps you dive beneath the superficial waves of daily comings and goings and to relax back into your Original Nature. Here, you can tap into life’s sustenance, feeling cared for, loved and supported.

The music and its movement meditation practice guides you serenely through passing challenges and attachments. It helps you to recognise the cycles of life, while helping you sense your inner guidance.

The lyrics consist of an English poem, written by Sara Avtar back in 2002, based on the 2nd Pauri of Nanak’s Japji (see text below). The focus of this mantra is on helping you find your peaceful centre, from where you can serenely navigate life’s ups and downs – with stability and patience.

‘INNER KNOWER’ Zoom Interview: About the Filming and Creation of this Celestial Communication:

Benefits of the practice:

✨Attuning to your Inner Guidance;
✨Aligning you with your True Nature;
✨Dwelling with Stability and Patience at your your Heart Centre;
✨Finding Sanctuary Within;
✨Penetrating the Impermanence of Superficial Realms;
✨Being Protected from Mismatched Subconscious Tendencies;
✨Releasing Filters of Duality;
✨Being Guided by Awareness;
✨Being in Resonance with Life. 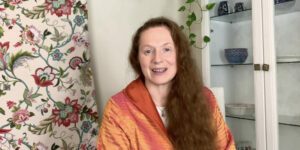 Sara Avtar is a life-long dancer, originator of Shakti Dance®, a KRI Kundalini Yoga Level 1 & Level 2 Lead Teacher Trainer, Sat Nam Rasayan Healer, recording artist, mother, and CEO of the Shakti Dance Academy. Over the last 15 years she has trained hundreds of Shakti Dance® Teachers and a talented team of Teacher Trainers all over the globe. Sara Avtar transmits the practice of Shakti Dance® with inspiration and insight, facilitating an embodied experience of its fluid, nurturing depth. Her teaching helps connect the practitioner to Source, enhancing the expression of unique personal potential and sustaining the much-needed unfolding into wholeness, for planetary harmony. Read more

The Inner Knower threads and directs every heart

Shaping the manifest in every part.
The innate impulse elevates and descends
We accordingly follow wherever it sends.
As the great wheel turns joy or misery’s our fate
But releasing resistance we pass through the gate.
Our abode is then lodged, safe at the axel
Delivered from presumption and tuned to One Will. ~ Sara Avtar

2nd Pauri of JapJi in Gurmukhi:

The Instruments on this Track

This tapestry of sound for this track has been woven by the musician, arranger and producer, Eric Forest (Hutchins), from instruments all around the world:
⁃ Cellos playing pizzicato;
⁃ Clarinet, played in the lowest Chalumeau register, emulating the Duduk (a double-reed instrument from Armenia);
⁃ Tanpura, a stringed instrument played rhythmically to keep the rhythmic pulse (India)
⁃ Dulcimer (American), a strummed stringed instrument generating drones – a “mountain-music” instrument from Appalachia
⁃ A Synthesizer pad sustaining the harmonies.

The “Inner Knower” Movement Meditation is a 40-day daily program with accelerated learning coach Sara Avtar. With just 9 minutes practice per day and a 10 – 20 minutes instructional video once per week, you’ll join Sara as she guides you through deep understanding and techniques for the Guidance of the Inner Knower.
The program is designed to be both easy to follow, and instantly transformational. As you progress through the days, you’ll quickly notice tangible changes in your energy and mind power – and the people around you likely will too.
By the end of the program, your alignment with the Inner Knower will be deeply infused on a cellular level: allowing you to access your newfound inner gifts whenever and wherever you need them.

✨To generate a sense of inner peace and security;
✨To feel at home with yourself;
✨To develop patience and recognition of life’s cycles;
✨To sense the inner guiding pulse within you;
✨How to recognise and follow that inner guiding pulse.

What You Get When You Select This Course

This membership is designed for Shakti Dance® Certified Teachers to keep improving their teaching technique and depth of practice, connecting to Shakti Dance Community and expanding their unique vibration through classes and workshops.

✨ Discounts on Online Activities worth €200+

✨ Promotion of your Shakti Dance activities in our Online Calendar

✨ Friendship, networking, and co-creation opportunities with the Shakti Dance members, which includes our most passionate and committed students.

✨ Private exclusive social network to connect with Shakti Dance Members across the globe.

This membership is designed for anyone wanting to return to the radiance and sacrality of their natural state.

✨ Discounts on Online Activities worth €200+

✨ Friendship, networking, and co-creation opportunities with the Shakti Dance members, which includes our most passionate and committed students.

✨ Private exclusive social network to connect with Shakti Dance Members across the globe.

There are no reviews yet.

Be the first to review “The Inner Knower ~ Movement Meditation”